Posted on 08/07/2017 by San Sebastian Donostia Greeters
Last Monday, our Greeter Maite welcomed Robert and Kapohau, two brothers from Nelson, New Zealand. They were very interested in getting to know about the Old Town and the Romantic Area of Donostia. Together, they visited the sculpture of the drummer in Sarriegi Square and the farms stands (baserritarrak) and the fresh food market.
Later they crossed Zurriola bridge and took some pictures from the City and Zurriola beach.
They also visited an old Gastronomy Society and churches and the Trinity Square. Trough the Monks walk they arrived to the Paseo Nuevo and the harbor and then to the Town Hall. They finished at the Gipuzkoa Square and Urumea river.
It was a great day and Robert and Kapohau told her Donostia is a lovely city.

Robert gave us permission to take a picture to his interesting tatoo, which comes from the Maori culture in New Zeland and it is very popular over there. 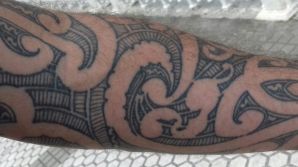 A free “welcoming service” to live and experience the Basque Country through the eyes of a local Greeter.